In Nepal, the female principle is widely and expicitly recognized. A woman is held in high respect in Vedic religion. Shaktism (female as a source of dynamic energy), in union with the male counterpart is recognized as the fundamental law of creation. In Nepal and in some parts of India, Shaktism is a popular cult and its main feature is the worship of Shakti or Devi who is regarded as the personification of the mother goddess. The most prominent is the worship of the living virgin goddess, Kumari.
Kumari is a virgin, but she is also grouped as one of the mother goddesses who are also consorts of some important male deities, like Lord Shiva. In India, the virgin worship of Kumari dates back to more than 2600 years among the Hindus. In South India, there is a famous temple of Kanya Kumari dedicated to the virgin goddess. Hinduism in Nepal is strongly influenced by Buddhism and esoteric Tantrism, and the main feature of Tantrism is the worship of Shakti. A  Hindu goddess worshipped in the form of a Buddhist girl testifies to the syncretism of religion in the Kathmandu valley. Kumari worship or worship of virgin girls is also related with the Tantric traditions. For attaining supernatural powers in Tantricism the virgin girls are worshipped. Probably, the Buddhist association of Kumari originated the Vajrayana school of Buddhism, and they got its ideas from the Shakti cult of the Hindus. Kumari is very popularly worshipped both by Hindus and Buddhists. 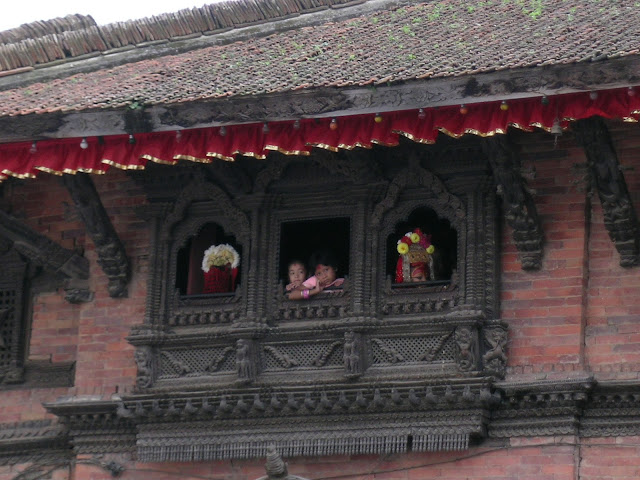 These virgin Buddhist girls  must be unmenstruated. Kumari is considered to be very pure and powerful. In Kathmandu valley small girls of age 2 to 4 are selected from the Sakya caste of Buddhist Newar community, one of the ethnic groups of Nepal. The girls should be in good health and should not have suffered from any serious illness, physical scar or defect on her. She should also not have lost blood, especially due to menstruation or loss of teeth. She should be able to walk, have black hair and eyes. She should not have an unpleasant body odour, and she should look calm, composed and normally unafraid. She should have all the 32 qualities of a goddess. This girl is then worshipped as Kumari untill some signs of impurity such as loss of teeth or beginning of her first menstruation or some incurable disease arise.
In Nepal there are several Kumaris. But the most influential Kumari is the Royal Kumari of Kathmandu. Her blessings were even sought by the King for successful governance. She could offer kingship and extend the ruling period of a king, annually reaffirmed the mandate received by the King to rule the kingdom. In the selection of Royal Kumari there is a very vigorous test carried out by a committee headed by the Chief Priest of the King. Her horoscope needs also to be read and found compatible with that of the King. In the case of Royal Kumari, if the girl starts weeping she is disqualified and the selection is again done for replacing her with a new one.
When a Kumari is disqualified, it is considered that the goddess has left her body. She becomes just an ordinary girl and can go to school and take part in other normal activities. As Kumari, she was not given any education, or training in reading and writing. Kumari is not allowed to put her feet on the ground, to touch any animal. Kumaris, especially Royal Kumari, live a life of imprisonment. She should not be touched other than the guardian of Kumari. An ex-Kumari can marry. However there is a belief that supernatural power remains in her as a result of which the man who marries her is destined to die soon. Ex-Kumaris are given 7 USD monthly upto 21 years old and some amount for the wedding ceremony. She is asked to return all valuble items. Valubles must be returned to a special fund  that supports the Kumari. She has to adjust herself from the status of a divine being  to a human being.
In the recently changed political situation in Nepal, the future of the cult of the Living Goddess has been a subject of a great deal of discussion. Slowly several traditions are showing signs of fading out or becoming out of place in the present situation.