CAO DAISM, a new Vietnamese religion, began when Ngo Van Chieu, an official in the French colonial administration, received a message from a “superior spirit” in 1919. The “Superior spirit” revealed itself to him as Cao Dai or the Supreme Being. Cao Daism attempted to bring all existing faiths in Vietnam under one single supreme creator, or Cao Dai, beginning first with the three major religions: Buddhism, Taoism, Confucianism; then Christianity, Islam, the Cult of Ancestor worship and the Saints of the world, regardless of race, sex or geography. Followers of this cult practice communication with the souls of the departed and are heavily influenced by European spiritualism. Statues of Jesus, Confucius, Buddha, Brahma, Shiva and Vishnu dominate the nave of the cathedral, the Cao Dai Holy See, as symbols of human fraternity.  Victor Hugo, Sun Yat Sen, Napoleon Bonaparte, Joan of Arc, Louis Pasteur and Sir Winston Churchill are all acknowledged as saints.  It is of fusion of Oriental and Occidental religions propounding the concept of a universal God.
The Divine Eye within a triangle, surrounded by sun rays is the representation of the existence of the Supreme Being. Cao Daists must avoid killing living beings, covetousness, verbal deceit and the temptations of the flesh-adherents look to hasten the evolution of the soul through re-incarnation. Chastity, simplicity and vegetarianism are the strict rules of the Religious Order. In 1926 Cao Daism became an official new religion recognized by the French colonial administration. It borrowed the structure and terminology of the Catholic Church. 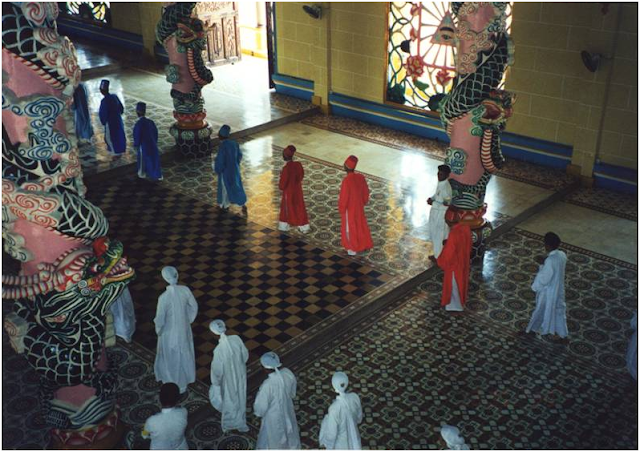 The attire worn on the way to the temple and the places occupied inside the temple during the service are determined by a person’s position in the hierarchy. The color of their robes indicates their “branch” of the religion: yellow for Buddhism: purple for Confucianism; and azure for Taoism. Offerings consist of flowers, fruit, incense, water, alcohol and tea. 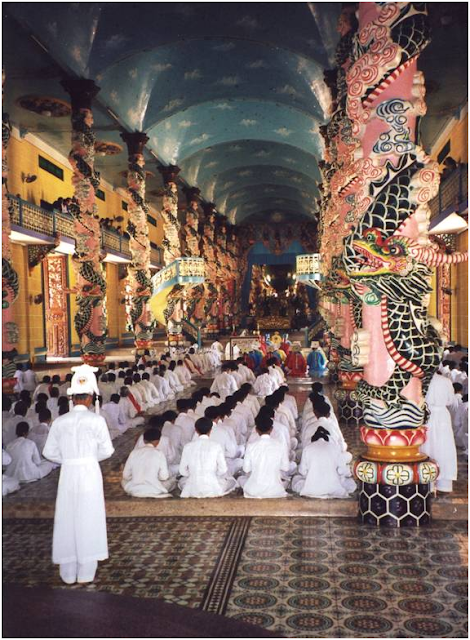 The sect’s highest authority is called the Pope. Cao Daism has female Cardinals and Popes. The Cao Dai Cathedral was built in 1927. The eclectic ideology of Cao Daism is mirrored in the interior. With the primary colours of a Hindu temple, the building bears the characteristics of both a cathedral and a pagoda. The arms of the papal chair are carved into dragons and there is a sky-blue ceiling with painted stars and fluffy clouds. Men enter the Cathedral through an entrance in the right wall, women by a door to the left, and all must take off their shoes. In the entrance of the temple, a Vietnamese poet and Victor Hugo are depicted writing on the walls, in French and in Chinese the Cao Dai principles of “God and humanity, love and justice”.  Beside them, the Chinese nationalist leader Sun Yat Sen holds an ink stone, a symbol of “Chinese civilization allied to Christian civilization giving birth to Cao Daist doctrine”.