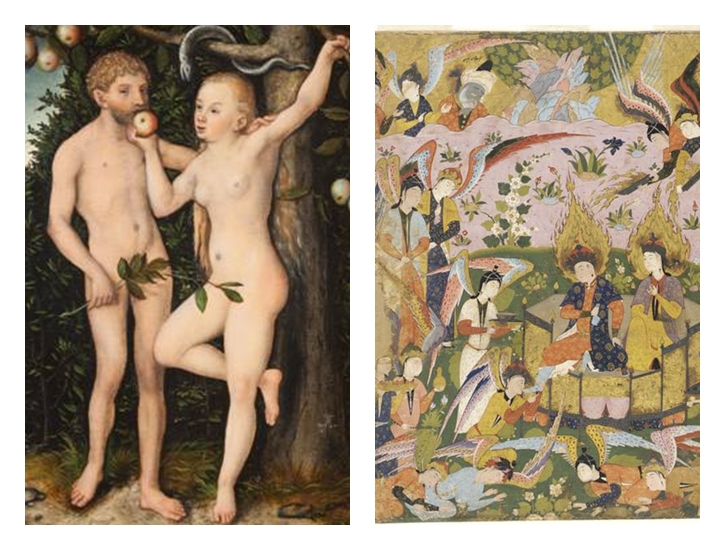 Creation– Both the Koran and the Bible tell the story of Adam and Eve in the Garden of Eden. But for Muslims, as for Jews, their “original sin” of disobedience is not passed on to humankind, so they don’t require salvation through the sacrifice of Jesus on the cross, a central doctrine of Christianity.
The Bible and the Koran trace a common lineage back to Abraham, who was neither Jew nor Christian, and beyond that to Adam himself. Theologically, both books profess faith in a single God, who creates and sustains the world. Both call humankind to repentance, obedience and purity of life. Both warn of God’s punishment and final judgment of the world. Both imagine a hell and a paradise in the hereafter.
Adam and Eve (1539), Lucas Cranach the Elder (1472-1553); angels bow before Adam and Eve in paradise, Mid. 1550s, Safavid period.
Photos: wikimedia.org; www.asia.si.edu 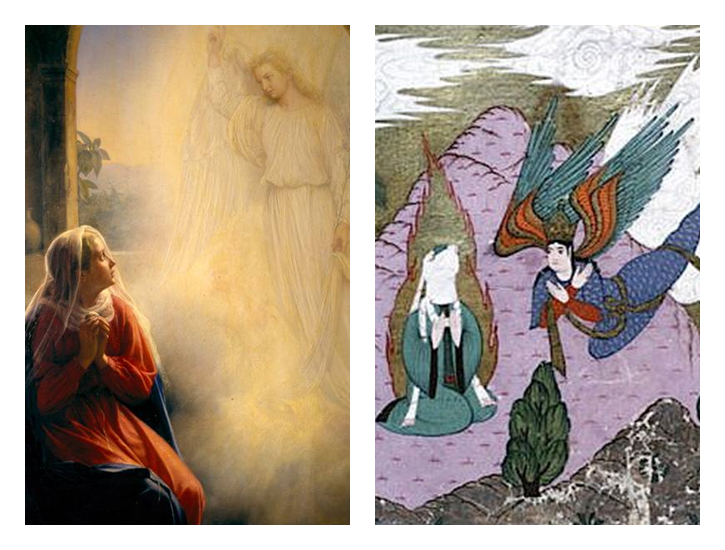 The Annunciation– In the Koran and the Bible the angel Gabriel is God’s announcer. Through Gabriel, Prophet Mohammed hears the revelations that, for Muslims, is the Word of God made book. In the Bible, Gabriel tells the Virgin Mary she will give birth to Jesus who, for Christians, is the Word of God made flesh.
The Annunciation by Carl Heinrich Bloch (1834-1890) and Mohammed with the angel Gabriel from an undated Turkish manuscript.
Photos: faso.com; ruhsalenerji.org

The Ascention– In one story extrapolated from a verse in the Koran (surah 17:1), the Prophet Mohammed ascends to the throne of God, the model for the Sufis’ flight of the soul to God. The story of Prophet Mohammed’s mystical nighttime journey from Mecca to Jerusalem, where he adresses an assembly of all previous prophets from Adam to Jesus. Yet another version of this story tells of his subsequent Ascension (mi’raj) from Jerusalem to the throne of Allah, receiving honors along the way from the prophets whom he has superseded. For Sufi mystics, Mohammed’s ascension is the paradigmatic story of the soul’s flight to God. For many Muslim traditionalists, however, the journey was a physical one. In the Bible, Jesus ascends to the Father after he is resurrected from the dead.
The Ascention of Christ, Rembrandt, 1636; Mohammed ascends in a 1583 Turkish text.
Photos: www.hymntime.com; www.omurokur.com